Tisdale is one of Saskatchewan’s most beautiful and friendly communities. Situated along the Doghide River, this picturesque suburban Town is located in Northeastern Saskatchewan, approximately 2 hours east of Saskatoon and is a short distance to many lakes and parks in the region.

Tisdale is a progressive, vibrant community with many attractive residential opportunities for all types of family units. Abundant recreational areas, quality schools, places of worship, retail and professional services are all within Tisdale. Tisdale is also the centre of trade and commerce in the Northeast region due to its central location and access to major highways, both national rail lines and access to Canada’s major trade corridors. Tisdale has one of the largest concentrations of international grain processors in the country collecting more than 2.4 million tons of various grain and seeds grown in the region making our community the preferred location for farmers.

Early Canadian explorer Henry Kelsey is known to have passed through the area as early as 1690 during his exploration of the Carrot River.  It would be just over two centuries before the settlement of Tisdale officially began in 1904 with the arrival of the Canadian Northern Railway, later known as the Canadian National Railway.

The earliest pioneers to settle in the district made the trek in pursuit of homestead land from as far away as Great Britain, the United States and Eastern Canada.  The Roaring Twenties brought a second wave of settlers to land east of the current town site, most of whom emigrated from Europe.  With the advent of the Great Depression only a decade later, pioneers from other parts of the prairies chose to relocate in the area completing the final influx of early settlement.

The addition of the Canadian Pacific Railway line in 1924 connected Tisdale to the rest of the nation by two of Canada’s permanent railway systems.  Since the days of the earliest settlement, Tisdale has enjoyed progressive and steady development.

The community was originally known as Doghide after the Doghide River that flows nearby, but with the arrival of the railway it was renamed Tisdale in honour of F.W. Tisdale, an employee of the CN Railway. 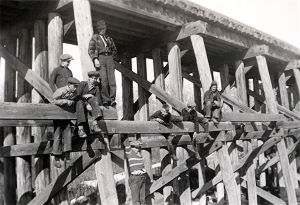 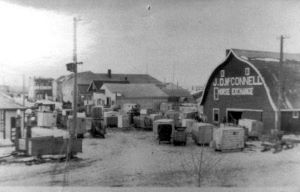